On his 80th birthday, the thespian is not ready to call time on his career. Amitabh Bachchan has been a struggler, superstar, bankrupt, a small screen phenomenon, a celluloid colossus and has more or less essayed all types of roles to remain an iconoclast. The arc of his universe littered with peaks and troughs has been legendary.

In an age where hyperboles are common, he stands apart for his being and remains a true legend. Over the years, I have met him and spoken with him several times. Modest to the point of being self-deprecatory, he refuses to accept that his persona remains larger than life. Never afraid to speak his mind, he is distantly related to funambulism.

As he once told me: “I want to keep working, I shall continue to do my best.” He added, “Actually, I don’t know what else to do. Life is a blur when one is essaying different roles, it is so fulfilling. As a professional, I cannot afford to be complacent. I want to perform and be tested; I want the energy of the younger generation of directors and actors to rub off on me. An actor’s career should not and cannot end, the stream should run ceaselessly. Actors should take on fresh challenges because the human mind is a sponge, it soaks up all the time, the process of learning doesn’t end.” His new movie “Goodbye” is out in theatres and will be followed by “Uunchai” next month.

At one level, suspicion and shadows lurk in the corridors of his mind. The thespian in his autumn cannot and will not forget his bankruptcy. His insecurity stems from those dark days. They act as a whetstone for him, a reference point and equally a reminder. In his case, it is the fear of the known rather than the unknown. “This is the incentive to keep going, because in my mind’s eye, I still fret over what will happen tomorrow,” he said. “Peaks and troughs are what life is all about. I’ve been at the lowest ebb in my life – professionally, commercially and personally,” he averred.

The Bachchan saga mushroomed in an age when black marketing and smuggling were ruling the roost, his cult type characters were chiselled by Salim Javed and the finished product who took on the establishment became embedded in the memory recesses of cinema goers. The booming baritone and long legs helped as he became the instrumentality against suppression, repression and oppression.

My first meeting with him came when ABCL was looking at a tryst with corporatisation and I went to meet him at his Ajanta Hotel office in Juhu, Mumbai. I was asked to wait and was fiddling with my dictaphone when I saw a pair of Kolhapuris under my eyeline and the famed Paul Muni baritone saying “Hi – I am Amitabh Bachchan”. Subsequently as luck would have it, my next job was at Plus Channel which was also housed in the same Ajanta Hotel complex and one saw more of the Man himself.

Subsequently, one has met Bachchan many times. He even invited me to be a judge at his KBC show and my joy knew no bounds. The one question that always nagged me was didn’t he ever get bored at being typecast as he took on stereotypical roles for Prakash Mehra and Manmohan Desai in the 1970s and 80s? I asked him this during one of my interviews with him and he provided a perspective which when viewed from his prism made complete sense. His take on this was strategic and is somehow lost on millions of his aficionados.

He said: “I don’t think I got typecast, this is a misconception. For every Manmohan Desai or Prakash Mehra film like ‘Amar Akbar Anthony’ or ‘Zanjeer’, myopically there was different cinema that I did and it was with deliberate intent. People forget I did ‘Alaap’, ‘Chupke Chupke’, ‘Bemisal’, ‘Jurm’, ‘Barsaat Ki Ek Raat’ and so many more.”

Mukherjee invariably brought out the sensitive side of Amitabh Bachchan. In a 1998 interview to Filmfare, Mukherjee shared that other directors of the era “reduced him (Bachchan) to a stunt man”. He said: “Other directors tried to exploit his image. They reduced him to a stunt man. Some people said I made a blunder by making him sing classical songs in ‘Alaap’ when he was busy holding guns and booze bottles in other films. Unfortunately, ‘Alaap’ didn’t do well. It was released during the Emergency when I was very depressed. I thought it was the end of my life.”

Bachchan says: “All the films I have done have been meaningful, every one of them had a beginning, a middle and an end. More importantly, poetic justice was served within 3 hours in all of them. You and I shall never get poetic justice in our lifetime – that is the beauty of Indian cinema. My age restricts me from playing young characters, so I must do roles commensurate with my age. I am fortunate to be getting work at this age.”

At the same time, he acknowledges Salim-Javed’s role. “Salim saheb and Javed saheb gave me scripts and stories that put me in the eyes of the public. Their scripts were creatives of immense credibility, the very best ever, perhaps. They were very conversant with the moods of the audience and they had a great sense of screenplay. I am not sure how they used me with reference to Paul Muni, but why do we always compare our work with that of others in foreign lands. Salim-Javed are established, home-grown talents, and we should take great pride in them. Equating them with someone from the west is unacceptable to me.”

When Rajesh Khanna was the presiding deity of Hindi cinema and romance and Kishore Kumar’s voice for him dominated the scene, Prakash Mehra queered the pitch with the creation of the Angry Young Man casting Amitabh Bachchan as the brooding Inspector Vijay Khanna turning B Town on its head forever. Mehra, along with Desai, who fathered the grander opus with his formulaic cinema unleashed a spanking new brand of Hindi films. While Mehra helmed “Zanjeer”, “Hera Pheri”, “Muqaddar Ka Sikandar”, “Lawaaris”, “Namak Halal” and “Sharaabi” to put Bachchan on the road to megastardom, Desai on the other hand reinforced the Bachchan mystique by creating entertaining capers extraordinaire.

The Bachchan-Desai collaborations were blockbusters – “Amar Akbar Anthony”, “Naseeb”, “Coolie”, “Mard”, “Parvarish”, “Suhaag”, “Desh Premee”, et al. Then there was Yash Chopra who again threw into stark relief the brooding imagery of Bachchan – from “Dewaar”, “Trishul”, “Kala Pathar” to unleashing the romantic hero in “Kabhie Kabhie” and “Silsila”. In this journey, there is one more director who cannot be ignored for his work with Bachchan – Ramesh Sippy – who made “Sholay”, “Shaan”, “Shakti” and “Akayla” with him. From Kachins to Gabbana, Bachchan has carried off many characters dressed in many shades by essaying a wide variety of characters.

To the movie which made him, Bachchan says “Zanjeer”, “Dewaar”, or “Namak Haram”.

“They were all landmark films that made a great impact on the audience. It was a challenge and a joy to be associated with them. ‘Zanjeer’ gave me my first individual success, but the others were of equal value.”

These directors were responsible for the Bachchan mystique in many ways. His body of work is long and distinguished, many of his recent roles have show the fine actor that rests within – “Shamitabh”, “Paa”, “Pink”, “Badla”, “Wazir”, “Piku”, “Black” – as he emotes his way to new heights, giving expression to his art and craft. 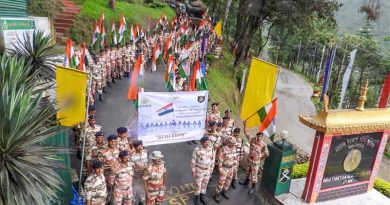 Russia suspends inspections of its facilities under US treaty

Kejriwal announces : Free yoga classes to continue at all costs