Bengaluru, Nov 18 : Online food delivery platform Zomato on Friday said that its co-founder, Mohit Gupta, had resigned after about five years at the food aggregator.

In May 2020, Gupta became Zomato’s co-founder after building the segment’s operations from scratch.

In a message that Gupta sent to his team, he stated “deciding to move on from Zomato to seek the other unknown adventures that life holds for me”.

“Over the past few years, I have seen Deepi (Managing Director and CEO Deepinder Goyal) become an even more mature and confident leader who is now completely capable of leading the business into a bright future with all of you by his side. It is with this confidence that I am deciding to move on from Zomato to seek the other unknown adventures that life holds for me. As I look ahead, I am full of excitement for the vision that Zomato, Blinkit, Hyperpure and Feeding India are building towards,” Gupta said in his note.

This is the third high-profile exit from Zomato in recent days.

The food delivery platform announced earlier this week that Rahul Ganjoo had ended his 5-year tenure as Head of New Initiatives. 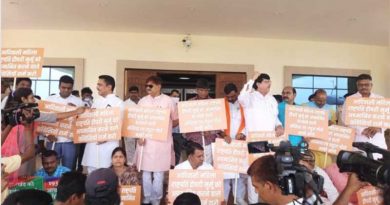 ‘Rules in place’, says Centre on regulation of online gaming

National : ‘Number of lawyers has dwindled’: CJI on legal professionals in legislative bodies