Pune, Aug 28 : On August 24, the 114th birth anniversary of the legendary revolutionary and Maharashtras hero, Shivram Hari Rajguru, passed virtually unnoticed, barring celebrations and solemn homage paid to him at his ancestral home in Pune with Governor Bhagat Singh Koshyari in attendance.

Rajguru, of the erstwhile Bombay Province (now, Maharashtra), was part of the revered trio along with Bhagat Singh and Sukhdev Thapar (both, Punjab), and all aged just 23 when they were hanged in the Lahore Central Jail (now in Pakistan) by the British rulers and attained martyrdom on March 23, 1931.

The daring young trio became immortal in history, with books, tele-serials, biopix, postage stamps, and the grand National Martyrs Memorial at Hussainiwala in Ferozepur (on the India-Pakistan border), commemorating their heroic sacrifice — though they did not live to witness the Tricolour being hoisted as India became independent 16 years later on August 15, 1947.

Now, 91 years after Rajguru’s martyrdom, his birthplace Rajguru-wada at Khed village in Pune, still awaits the promised memorial to its hero, although the (Khed) village has been renamed as ‘Rajgurunagar’ in his honour.

“The eHutatma Rajguru Smarak Samiti’ looks after the sprawling Rajguru-wada – donated by the family free to the government around 2010 and we hope that a Rs.86-crore memorial plan will be implemented by the state soon,” HRSS Secretary Sushil Manjare told IANS.

Around half a dozen descendants of Rajguru — from his brother Dinkar’s side, including grand-nephews Satyasheel and Harshavardhan — both HRSS trustees, live with their families and do business in Pune.

According to Manjare, the memorial would include a museum on Rajguru, Bhagat Singh and Sukhdev Thapar, a library for researchers and students, an auditorium and since Rajguru was a fitness enthusiast, a wrestler, shooter and swimmer, there will be a swimming pool, a gymnasium, and a shooting-archery range to train and develop Olympic class shooters.

The existing Rajguru-wada was constructed by the Chhatrapati Shahu Maharaj of Kolhapur, and later rebuilt by the state archaeological department.

It comprises a grand stone building on the banks of Bhima River, an arched door entrance, the main living quarters, a prayer room, the small room where Rajguru was born, a tiny Hanuman Temple which he later built in his teens, plus an old ‘vyayamshala’ (gym), an old well with a washing stone and an earthen water storage pot.

There are busts of the revolutionary trio where the locals, visitors and tourists regularly pay homage.

While no official functions are held here, since the past nearly two decades, the HRSS conducts flag-hoisting ceremonies on January 26 and August 15, observes the Martyrs Day on March 23 and celebrates Rajguru’s birth anniversary on August 24, said Manjare.

As he grew up, Rajguru joined the Nutan Marathi Vidyalaya in Poona (now, Pune), though his mind kept veering towards the Independence movement and as he witnessed the atrocities perpetrated by the British rulers, he developed a strong love for his motherland and a passion to fight for her liberation.

At one point after a quarrel with his brother, Rajguru left home with only 11 paise in his pocket and subsequently as a teenager worked with the Congress Seva Dal founded by Dr N. S. Hardikar and attended his training camps.

It was during his time with the HSRA that Rajguru honed his shooting skills, and came in contact with his future co-martyrs and the trio went down in history in December 1928 after they gunned down a British police officer John P. Saunders.

The Saunders killing was said to be in retaliation for the death of Lala Lajpat Rai who succumbed to his injuries sustained during a British police lathicharge while leading a huge protest in Lahore against the ‘(Sir John) Simon Commission’, in November 1928.

Determined to avenge the death of Lalaji — also known as the Lion of Punjab — the trio of Singh-Sukhdev-Rajguru planned the killing of James A. Scott, the then police chief of Lahore, but in a case of mistaken identity, shot dead Saunders, a fresh intern on December 17, 1928.

As the British rulers went after them, the trio announced that they had “avenged Lalaji’s death” — though their act earned them the disapproval of the Indian National Congress and Mahatma Gandhi who shunned violence. All three were subsequently arrested.

They were tried along with 21 co-accused, found guilty and sentenced to death by hanging on March 24, but in view of the growing tension in Lahore, they were quietly executed the evening before on March 23, 1931.

In view of the massive public outrage, the jail authorities smuggled out their bodies through a back door and hastily cremated them on the banks of Sutlej River at Hussainiwala village of Ferozepur (Punjab).

Post-Independence, the National Martyrs Memorial Hussainiwala came up at the site, depicting the revolutionary life and times of the legendary trio, on the current India-Pakistan border, with precious handwritten letters of the three martyrs, the gun of Singh with which he shot the Britisher, and other historic memorabilia.

The HRSS trustees in Pune are optimistic that on the 75th anniversary of Indian Independence, the government will initiate the proposal to construct the Rajguru memorial at his ancestral home on priority.

(Quaid Najmi can be contacted at q.najmi@ians.in) 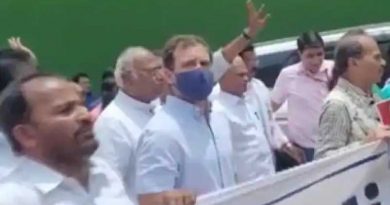