Islamabad, Aug 22 : Former Pakistan Prime Minister Imran Khan moved an anticipatory bail plea in the Islamabad High Court seeking immunity from arrest in a terror case filed against him over the weekend.

According to the The News, it is not yet decided whether Khan would be arrested or put under house arrest, sources engaged in sketching the strategy of the operation told The News.

A first information report (FIR) was registered against the ousted prime minister under the Anti-Terrorism Act (ATA) for threatening an additional sessions judge and senior police officers of the Islamabad Police at a rally here in F-9 Park.

The Interior Ministry has sought written permission from Prime Minister Shehbaz Sharif’s office to arrest Khan following the registration of the case.

According to sources, the PTI chairman has left his Bani Gala residence to avoid arrest. It is being reported that he may have left for Lahore or Khyber Pakhtunkhwa, the GeoTV report added.
However, PTI leader Faisal Vawda said that Khan is still at Bani Gala.

According to The News sources, the arrest will be made with the consensus of all parties in the ruling alliance.

PPP leader and former president Asif Ali Zardari has opposed the arrest of Imran Khan. He believes that the arrest will cause political damage to the ruling alliance.

On the other hand, Pakistan Democratic Movement (PDM) President Maulana Fazlur Rehman did not give a clear view the PTI leader’s arrest.

Police force has been deployed outside Imran Khan’s Bani Gala residence and the road leading to his residence has also been closed. Only people close to him and the residents of the area can enter, sources told Geo News hours after the FIR.

“Negotiations with Imran Khan are under way, as the PTI leader wants to avoid arrest or house arrest,” added TheNews sources, saying that the authorities have multiple plans to handle the situation with the help of law-enforcement agencies, but were waiting for a green signal from the quarters concerned.

“Imran Khan is seeking the facility to approach the higher judiciary for obtaining relief, but he will have to surrender before the police as the first step,” the sources added.

The FIR was registered on the complaint of Magistrate Ali Javed in Islamabad’s Margalla Police Station at 10 pm Saturday under Section 7 of ATA. 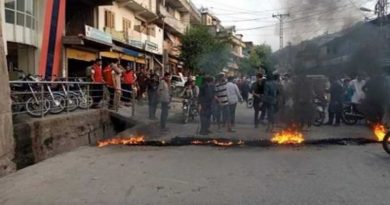 Madonna gets candid about her obsession with sex