#item_description], More than three million people across Syria require assistance through what is likely to be an “incredibly hard” winter, the acting deputy UN Emergency Relief Coordinator told the Security Council on Wednesday, highlighting that those displaced remain “particularly vulnerable”.

Against the backdrop that 6.7 million people in Syria are internally displaced – a third of whom lack proper shelter and live in damaged buildings, or public spaces like schools or tents – Ramesh Rajasingham, Acting Assistant Secretary-General for Humanitarian Affairs told ambassadors online that “winter weather is proving to be incredibly hard for those without adequate shelter” or “basics like fuel for heating, blankets, warm clothes and shoes”.

Turning to the economic crisis, Mr. Rajasingham noted that between the devaluation of the Syrian currency and increasing food prices, people are “increasingly unable to feed their families”. 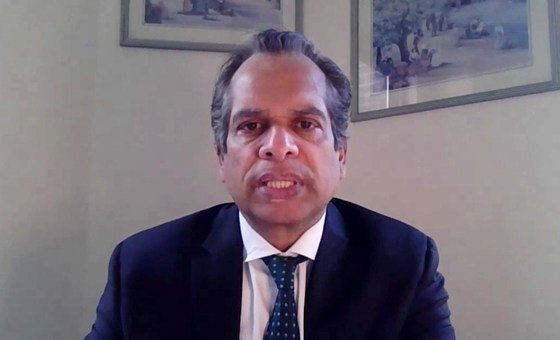 “Today an estimated 9.3 million people in Syria are food insecure – that’s 1.4 million more people than a year ago and more than at any other time during the crisis”, he informed. “About one million of them are severely food insecure – twice as many as last year – and we expect this number to increase”.

On protecting civilians, the UN official noted that some areas of the country that had been temporarily spared fresh violence are now seeing its return, with significant consequences for their human rights and well-being.

At least eight civilians were reportedly killed and at least 15 others were injured because of shelling and airstrikes in the northwest this month, including two aid workers on their way to a UNICEF-supported child-friendly space, according to Mr. Rajasingham.

And over the past two months at least six humanitarian workers had been killed and others injured.

“The risks our humanitarian colleagues are taking every day are simply unacceptable”, he stressed. “Humanitarian workers must be able to deliver assistance without fear of attack”.

“Let me be clear: Health services are extremely weak across the country and are being stretched to new extremes under the public health impact of COVID-19”, he spelled out. “Gaps in assistance and shortages of medical supplies and personnel are prevalent everywhere”.

Mr. Rajasingham said that due to a lack of beds, women in Dar’a, in the south, were giving birth in rooms alongside other patients.

The UN official’s final point was on protecting those providing aid across Syria.

Humanitarian agencies throughout the country have collectively reached some 7.4 million people with assistance each month “to stave off an even worse situation”, he stated.

“This would be impossible without the extraordinary commitment and endurance of our front-line colleagues, who are overwhelmingly Syrian and are themselves directly affected by the crisis”, continued Mr. Rajasingham. “They are delivering aid under the most difficult of circumstances, at great personal risk. They must be protected”.

Despite the “considerable” challenges posed by COVID, Khawla Matar, Deputy Special Envoy for Syria, said that moderate progress was being made by the Constitutional Committee, which is working on a new roadmap for the future of the country.

However, she reminded the virtual meeting, “the constitutional track alone cannot resolve the crisis”.

Noting that the current “relative calm” is still too fragile and too far removed from a lasting permanent ceasefire, she said that the “terrorist challenge” still confronts the country and insisted that genuine peace for Syria requires all violence to cease, including against women.

Additionally, Ms. Matar upheld that sanctions would “exacerbate” the already considerable misery of many ordinary Syrians and also stressed that “regardless of their choices”, refugees must be supported.

In closing, the Deputy Special Envoy affirmed that Security Council Resolution 2254, adopted in 2015, contains “all the elements” needed for a lasting peace in Syria and to help the country and its people move forward on multiple tracks.

Millions of children in crisis hotspots ‘on the brink of famine’, warns UNICEF

Insight Online News Lucknow, July 2 : If indecision is the hallmark of any political party in the present times,

Focusing on things that are in my control: Rajat Patidar

Taliban warns foreigners ‘not to interfere’ in Afghanistan

Ranbir Kapoor : It’s my dream to do a negative role

Imran to lead rally from Pindi to Islamabad

Sinha gets warm welcome in Hyderabad

Teaser of ‘Rangbaaz-Darr Ki Rajneeti’ out