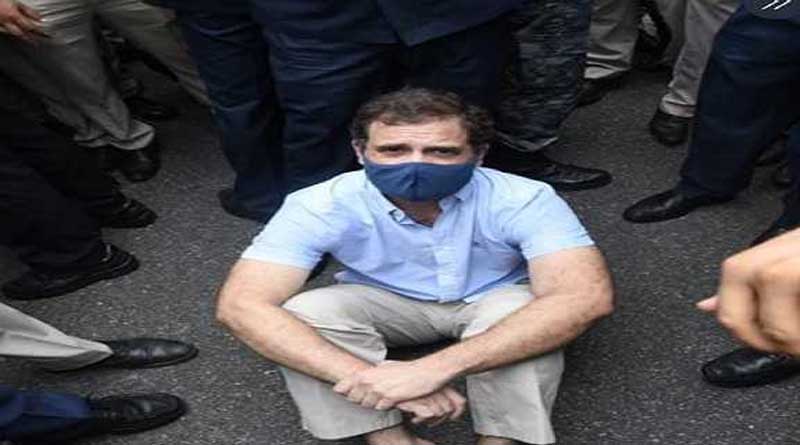 New Delhi, July 26 : Congress leader Rahul Gandhi lashed out at the “autocratic behaviour” of the central government, saying “India is a police state and Modi a king” as he was picked up by the police from street amid protests by Congress against Sonia Gandhi’s questioning by the Enforcement Directorate on Tuesday.

Just as he was about to be detained, Rahul Gandhi told the media, “India is a police state, Modi is a king” before Delhi Police put him in a bus along with Rajya Sabha Leader of Opposition Mallikarjun Kharge, Ranjeet Ranjan, KC Venugopal, Manickam Tagore, Imran Pratapgarhi and K Suresh from outside the Parliament on their way to Vijay Chowk.

Congress lawmakers protested inside Lok Sabha and in the Parliament complex on the day when party President Sonia Gandhi appeared before the ED for questioning for the second day in the National Herald case.

Former party president Rahul Gandhi was detained among others as they marched out of the Parliament House.

“Look at the dictatorship, cannot hold peaceful demonstrations, cannot discuss inflation and unemployment. By misusing the police and agencies, even by arresting us, you will never be able to silence us. Only ‘Truth’ will end this dictatorship,” Rahul Gandhi tweeted as he was escorted to a police bus from the street where was in a sit in along with other Congress leaders.

Congress MPs protested inside the Lok Sabha on Tuesday morning as the House met. After the House was adjourned, MPs from Lok Sabha, as well as Rajya Sabha staged a protest in the Parliament complex in front of the iconic Gandhi statue.

The party lawmakers raised slogans against the government, and carried a poster which read ‘stop misuse of ED’.

The were also joined by some of the MPs from other opposition parties including Supriya Sule from NCP, Kanimozhi from DMK, NK Premchandrandran of RSP and Binoy Viswam of CPI.

Rahul Gandhi, Kharge, and Congress leader in Lok Sabha Adhir Ranjan Chowdhury, besides senior leaders including P Chidambaram, Digvijaya Singh, Jairam Ramesh and others raised slogans and marched out of the Parliament to Vijay Chowk.

‘All MPs came here. They talked about inflation, unemployment. They (Police) are not allowing us to sit here. Discussions are not allowed inside (the Parliament) and here they are arresting us,” Rahul Gandhi said before being detained.

Sonia Gandhi is being questioned by ED today for the second day. She was also questioned for two-three hours on July 21.

Rahul Gandhi has already appeared for questioning at the ED for five days, and has been questioned for over 50 hours.

The National Herald case is related to a complaint filed in the court of the Metropolitan Magistrate that Associated Journals Limited (AJL) took an interest-free loan of Rs 90.25 crore from Indian National Congress, which was not paid back.

Congress has maintained there has been no money laundering involved, and has called the summon a politically motivated move by the Modi government.