Washington, Aug 24 : US President Joe Biden’s administration announced on Wednesday it will cancel up to $10,000 in student debt for borrowers who earn $125,000 a year or less and up to $20,000 for recipients of Pell Grants that roughly follows his Education Department’s demand for a student debt forgiveness programme.

A total of 45 million borrowers owe $1.7 trillion in student debt.

NBC news reported Wednesday that couples who earn $250,000 a year or less who file taxes jointly will also qualify for cancellation of up to $10,000 for each partner. The administration is also extending the payment pause on federal student loans for a final time till December 31. This follows a decision taken by the Education Department.

In a tweet, Biden said that he would have more details on the announcement later this afternoon. Biden had come under criticism from student debt relief advocates for waiting until just days before the August 31 deadline to announce an extension, leaving millions of borrowers unclear about whether they would have to start making payments for the first time in more than two years.

Although the President made good on his campaign promise to address student debt, the move falls short of the $50,000 in cancellation that some Democrats have called for. The narrow scope of the cancellation is also likely to frustrate student debt relief advocates who were pushing for broader action.

Some advocates warned that means testing would make implementation more challenging and have argued that extending the payment pause for a few months would not be enough time to make adjustments to borrowers’ balances, NBC news said.

“While this announcement is a major win for many, it is important to stress that the $10,000 limit will leave many others still crushed by debt, and important details will determine who has access to much-needed relief,” said Natalia Abrams, the President and founder of the Student Debt Crisis Center.

Federal student loan holders haven’t been required to make payments since March 2020, when then President Donald Trump signed into law the CARES Act, which paused payments till September 2020 and stopped interest from accruing in an effort to alleviate the economic impacts of the pandemic.

The moratorium doesn’t apply to borrowers with privately held loans. Although the President has said that the economy has rebounded from the pandemic and has ended most other Covid-era economic support, some Democrats have warned Biden that turning payments back on so close to the midterm elections could upset voters. Some have also argued that it would be unfair to restart payments while high inflation is pushing up essential costs, such as food and home rent.

Advocates for debt forgiveness have become increasingly frustrated with Biden’s drawn-out decision-making process on student loans. They have also argued that the longer payments remain paused, the more politically difficult it will be for the President to restart them.

Roughly 45 million Americans have student debt. The Federal Reserve estimated that in the second quarter of 2022, Americans owed more than $1.7 trillion in student loans.

While most student borrowers owe less than $20,000, people with smaller amounts of debt often have a harder time paying it off because they might not have completed their degree or have degrees with lower earning power compared to those with more debt. Studies also show that students of colour are more likely to take on student debt and struggle disproportionately to pay it back. The highest default rates are among students who attended for-profit institutions. 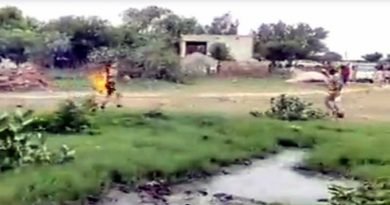 Saint who self-immolated in Rajasthan dies in Delhi hospital