Colombo, Nov 14 : Presenting Sri Lanka’s Budget for 2023, President Ranil Wickremesinghe said on Monday that his country has resumed efforts to integrate with key markets such as India and China in order to expand its market access.

“It is essential that Sri Lanka expands its market access whilst developing domestic supply capacity. Global trade is today driven by regional and global production networks such as ASEAN, where Sri Lanka has not yet been fully engaged to obtain benefits. Policy measures will therefore focus on enhancing Sri Lanka’s ability to compete in global markets through innovation, efficiency, and quality,” he said.

Anticipating an International Monetary Fund (IMF) $2.9 billion bailout, Wickremesinghe said that negotiations are currently in progress and the government is “in dialogue with India and China on debt restructuring”.

“We are confident that these discussions will lead to positive outcomes,” he said.

In September, Sri Lanka clinched a deal with the IMF for a 4-year $2.9 billion
extended fund facility but it is subject to debt restructuring with the creditors.

“We lost our way because of taking that popular route. Now we can no longer go down
wrong paths and despair. We are not having a wedding by being in debt to the world. What
we are doing with this budget is to lay a foundation that we can stand on our own strength.”

Wickremesinghe, who took over the presidency from Gotabaya Rajapaksa who fled the country in July when angry protestors stormed President’s house following economic crisis with shortages of all essentials including food, fuel and medicine, presented an interim budget in August for the rest of 2022.

For 2023, he has planned a budget with ambitious goals for high economic growth of 7 to 8 per cent, increasing international trade as a percentage of GDP by more than 100 per cent, annual growth of $3 billion from new exports from 2023 to 2032, foreign direct
investment of more than $3 billion in the next 10 years and creating an internationally
competitive workforce with high skills in the next ten years.

Nadal out of ATP Finals after loss against Felix 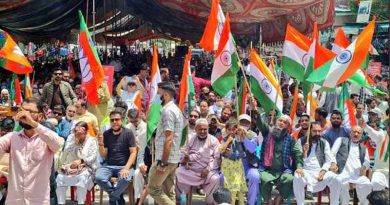 Politics : Time for PoJK to reunite with India?