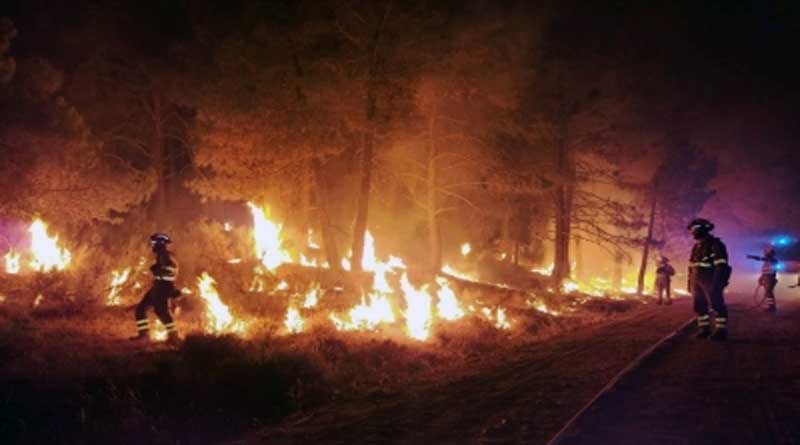 Bordeaux(France), Aug 12 : Over a thousand firefighters are battling a massive wildfire in south-western France that has already destroyed about 7,400 hectares of forest, officials say.

The blaze about 30km south-east of the wine-growing hub has gutted some homes and forced 10,000 residents to flee.

The port city on the Garonne River in southwestern France is known for its Gothic Cathedrale Saint-Andre, besides 18th and 19th-century mansions and art museums like the Musée des Beaux-Arts de Bordeaux. France will see public gardens lining the curving river quays destroyed if the fire is not contained.

Strong winds and high mercury are hampering the operation.

Sixty-five German firefighters have also arrived from Bonn and others from Poland and Romania are expected in the fire zone soon, the BBC reported. “European solidarity at work!” President Emmanuel Macron tweeted.

France has nine water-bombing helicopters deployed and is also getting some firefighting aircraft from Greece and Sweden.

The wildfire in Gironde region has been raging for two days near the small town of Landiras. Last month a wildfire burned 14,000 hectares in the same area before being contained. It was France’s driest month since 1961.

This summer France and a number of other European countries have seen a wave of deadly wildfires, triggered by record temperatures and droughts across the continent.

More than 1,000 deaths have been attributed to the heat in Portugal and Spain.

A wildfire is now raging in the mountainous Serra de Estrela park in central Portugal, where 10,000 hectares of forest has been destroyed. The area is sparsely populated. About 1,500 firefighters are tackling the blaze.

In the UK, an amber extreme heat warning has come into force, with temperatures forecast to hit 37 degrees Celsius in some areas over the next four days. The heatwave is expected to affect health, transport and working conditions, the authorities warn.

National : Embarrassment for Trinamool as MLA describes party as ‘company’, Mamata as ‘brand’