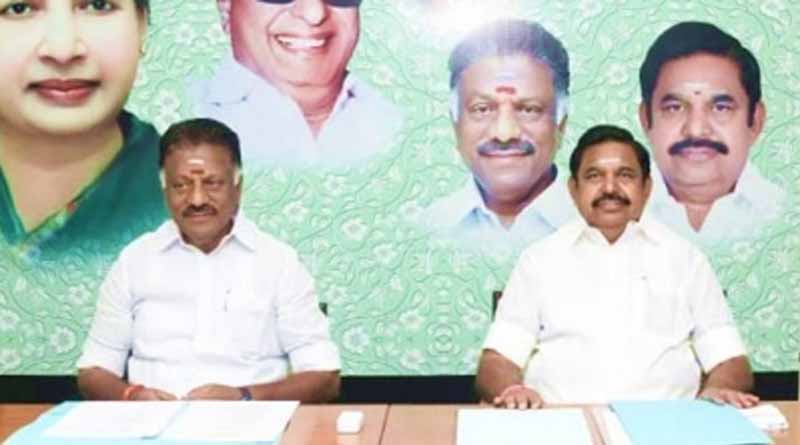 Chennai, July 24 : The overwhelming victory of Edappadi K. Palaniswami as the general secretary of AIADMK in the July 11 general council of the party, decimating the opposition raised by senior leader O. Panneerselvam, has caused the party to rethink its political strategies.

According to insiders in the party, AIADMK has commenced discussions with the Congress party in Tamil Nadu aiming for the 2024 general elections and wants to snap ties with BJP. The presence of a large number of minority votes in Tamil Nadu is one of the major reasons for AIADMK under Edappadi K. Palaniswami to rework its strategies.

The entry of K. Annamalai as the head of Tamil Nadu BJP and his aggressive postures have led to the party gaining ground in the state and there is a general feeling that the saffron party was growing at the expense of AIADMK. More than this, BJP under Annamalai has turned into an aggressive political movement and this has also systematically led to the minority communities of Tamil Nadu to distance themselves from the saffron party.

Sources in AIADMK told IANS that if the party continues its alliance with NDA, the possibility of it getting sidelined in Tamil Nadu politics will be a reality.

Dr. G. Padmanabhan, Director, Socio-Economic Development Foundation, a think tank based out of Madurai while speaking to IANS said: “The move of AIADMK is expected as in Tamil Nadu politics, you have to have an alliance with the minority communities to make a mark and AIADMK is now out of that loop. On the other hand, the party cannot piggy-back ride with the Hindutva politics as BJP is asserting itself under Annamalai. Hence, AIADMK has to reinvent itself and with the party coming under a single leader rule, he can make a decision, and possibilities of that decision coming up openly are there in the near future.”

AIADMK has a single Member of Parliament in the 2019 general elections out of the 38 seats with O. Panneerselvam’s son, O.P. Raveendranath who won from the Theni Lok Sabha seat. He is now expelled from the party and this will technically mean that AIADMK does not have an elected representative in the Parliament.

After the convincing victory in AIADMK general council elections, Edappadi K. Palaniswami held a brainstorming session with the party senior leaders and have got feedback on snapping ties with the NDA and reinventing itself to be battle-savvy in the 2024 general elections and to catapult to power in the 2026 assembly elections.

With the DMK under Stalin bringing in several reforms and aiming at a trillion-dollar economy, the AIADMK leadership is planning to be in the political realm of things as without getting seats, party will turn into a non-entity.

The Congress party in Tamil Nadu is also sore that it is not being given due recognition on the DMK front and that in the ensuing Lok Sabha elections, the party may not be allocated the seats it aspire to contest as DMK in itself has emerged as a major political force.

A senior leader with the Congress party of Tamil Nadu who does not want to be named, while speaking to IANS said: “The Congress in Tamil Nadu will be systematically marginalised if we don’t enter into a proper political engagement. With AIADMK also not in a good political position, it is better if we both align and try and experiment with new frontiers which will reinvigorate both the parties and this will be an experiment that can lead to entering power in a big way in 2026 assembly elections.

Congress has 7 MPs in Lok Sabha from Tamil Nadu while AIADMK has only one MP who now stands expelled. This would mean higher bargaining from the Congress and DMK with its brute majority in the assembly will not consider the demands of Congress for more seats. Hence, the better option will be an alliance with AIADMK.

AIADMK has also been advised by its political strategist that the party would be in the political limelight only if it has to get the minority votes and for that, the best option was to snap ties with BJP and to scout for new allies. Congress is the best ally for the AIADMK at present and with the possibility of returning to power still not clear, Congress can bargain for more seats from AIADMK and to return maximum MPs from Tamil Nadu.