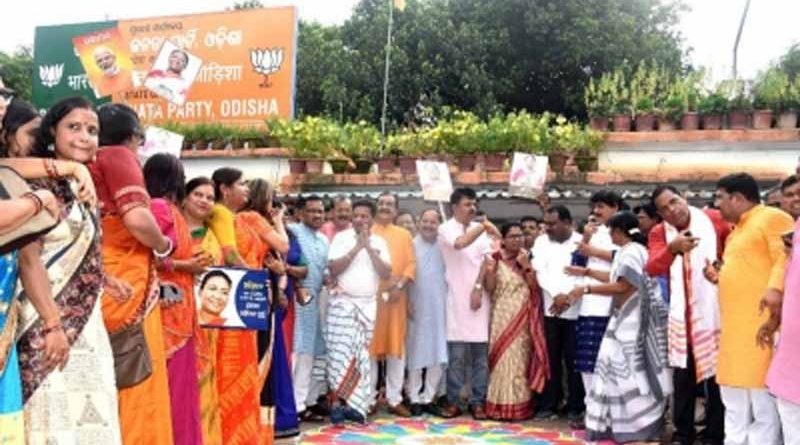 Bhubaneswar, July 21 : With NDA’s Presidential nominee Droupadi Murmu securing the majority mark to be elected as the 15th President of India, people at her hometown Rairangpur in Odisha’s Mayurbhanj district burst into celebrations on Thursday.

Scores of people gathered at the residence of Murmu in Rairangpur and burst firecrackers, while local artistes performed tribal folk dance. The house of Murmu was decorated with flowers and lights.

People at her native place were also seen celebrating the occasion on the streets of Rairangpur. Also, around 20,000 sweets were prepared which are now being distributed among the people.

“We are really happy and proud as our ‘didi’ has won the election for the highest post in India. From the very beginning, we were confident that she would win this election. So, from the morning we have started celebrating her victory,” said Sonali, a native of Rairangpur.

“This is the first time that someone from Odisha is going to be the President of India. We are also happy that a tribal lady has been elected for the President’s post and that too from Odisha,” said Simanta Digar, a social worker from Mayurbhanj.

People from different walks of life, including women and children, along with leaders from BJP and Biju Janata Dal (BJD) also started celebrating the victory of Murmu at different places across the state.

In Bhubaneswar, BJP MLAs were seen distributing sweets among themselves in the Assembly to celebrate the occasion.

Odisha Chief Minister Naveen Patnaik congratulated Murmu on being elected as the 15th President of India.

“It is indeed a very proud moment for everyone in Odisha that she has been elected for the highest office in the country,” he tweeted.

Murmu’s journey from a humble beginning to becoming the first citizen of the country is indeed inspiring and is a shining example of women empowerment, Patnaik said, as he wished Murmu for a fulfilling tenure ahead.

“Many congratulations to Draupadi Murmu Ji on getting elected as the president of India. Happy that an Odia has occupied such a high office,” tweeted Congress legislative party leader Narasingha Mishra.

Ukrainian experts to participate in probe into missile strike in Poland