New Delhi, Sep 3 : The IITs have been the pride of the nation, President Draupadi Murmu said on Saturday while speaking at the closing ceremony of the diamond jubilee celebrations of IIT Delhi here.

The President said that the IITs have proved to the world the capability of India in the domains of education and technology.

“In more ways than one, the story of the IITs is the story of Independent India. The IITs have contributed immensely to India’s improved standing on the global stage today. The faculty and alumni of IITs have shown the world our brainpower,” she said.

“Some of those who studied in IIT Delhi and in other IITs are now at the forefront of the digital revolution sweeping the world. Moreover, the impact of IITs has gone beyond science and technology. IITians are leaders in every walk of life – in education, industry, entrepreneurship, civil society, activism, journalism, literature and politics,” the President said.

Murmu said that the latest example of IITs’ social concern was seen during the initial phase of the pandemic. Rising to the challenge of containing the virus, IIT Delhi initiated important research and development projects.

IIT Delhi’s contribution to India’s fight against Coronavirus has been a model of how engineering and technology institutions can play a role in a public health crisis, she added.

“By 2047, when we will celebrate the centenary of Independence, the world around us will have changed drastically, thanks to the fourth industrial revolution. Just as we were in no position 25 years ago to imagine the contemporary world, we cannot visualise today how artificial intelligence and automation are going to transform life.

“With our high population numbers, we need to have a foresight and strategies in place to deal with the forces of the future where disruptions will be a new normal. The nature of employment will get completely changed,” she pointed out.

Pointing to the fact that climate change poses a serious challenge, the President said that as a developing country with a high population base, our energy requirement for economic growth is very high.

“Hence we need to shift from fossil fuels to renewable energy,” the President said.

Speaking on the occasion, Union Education Minister Dharmendra Pradhan said that IITs will further motivate our education fraternity in realising the goals of ‘Amrit Kaal’.

He also congratulated IIT Delhi on its illustrious 60 years of journey, saying that the institute has played a crucial role in furthering national progress.

“It is a matter of great pride that today many developed countries are evincing interest towards establishing and hosting offshore IIT campuses in their countries. This is a reflection of the prowess, strength and quality of our prestigious IITs,” Pradhan said. 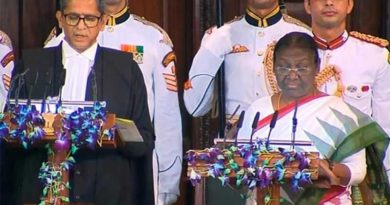