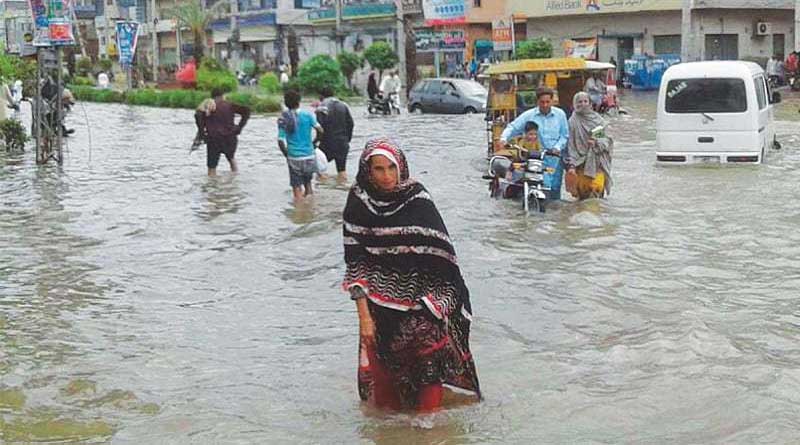 People began protesting against the administration as incessant rain led to severe water logging in several areas in the Sindh. People were angry due to hours-long power outages and inundation of residential areas as they complained that officials were nowhere to be found.
Rains have particularly spelt misery for the city of Karachi. Though the fresh spell of the current monsoon season had weakened in Karachi, it still claimed 11 more lives in a single day: five people lost their lives due to electrocution, while six persons drowned.

Though several key roads were cleared by the administration after hours-long efforts in the city by the sea, life remained miserable in several low-lying areas, residential neighbourhoods, housing societies and commercial centres which remained flooded.

The rain, which started early on Sunday continued to come down till 10am with frequent breaks and by the end of first half of the day the city had received up to 204-millimetre rain, with the Met Office predicting that even though the system took a break on Tuesday, it was likely to persist for at least two more days.
Due to the heavy downpour, Monday had already been declared a holiday for the citizens of Karachi and Hyderabad.

In Dadu and Khairpur Mirs, two persons were killed and 10 others were injured in rain-related incidents.
Large swathes of land came under water as rain flooded streets and inundated standing crops in villages of the coastal districts of Thatta and Sujawal. The deluge also suspended traffic between Karachi and Badin as water accumulated on the national highway passing through the Thatta district.

The Frontier Works Organisation (FWO) and the highway authorities managed to open one track for traffic after prolonged efforts to restore the traffic flow. According to official information, the Thatta district received 220 millimetre of rain this season.

In the coastal talukas of Ghorabari and Mirpur Sakro, hundreds of acres of agricultural land was submerged after a riverine stream started overflowing due to rain. The water level in Keenjhar Lake also witnessed an increase due to rainfall.