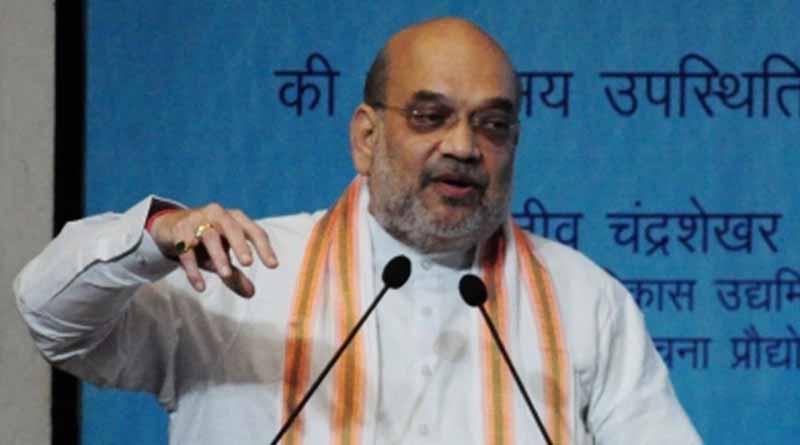 Hyderabad, Aug 21 : Union Home Minister Amit Shah on Sunday appealed to people of Munugode Assembly constituency in Telangana to elect Komatireddy Rajagopal Reddy in the by-election, as after his win, the Telangana Rashtra Samithi (TRS) government will collapse in no time.

“You elect Reddy in the by-election, I will guarantee that the corrupt government of KCR will collapse in no time,” he told a public meeting in Munugode in Nalgonda district.

Rajagopal Reddy, who recently quit as the MLA and resigned from Congress, was welcomed into the BJP by Amit Shah.

The Home Minister said it was not merely joining of one leader into BJP but it was the beginning of the end of the KCR government.

Appealing to people to elect Reddy with a massive majority and bring the BJP to power in the state, he promised that the BJP will ensure that Telangana develops like the rest of the country. “We will ensure that the goals for which Telangana state was formed are realised,” he said.

Shah alleged that “KCR and company” went back on all their poll promises. He claimed that the TRS had promised an unemployment allowance of Rs 3,000 to every unemployed person, and to construct a super speciality hospital in every district. He said KCR promised two bed-room houses. He not only failed to construct the houses but created hurdles in construction of toilets by the Modi government.

Shah claimed that there were no recruitments in the education sector since 2014. He remarked that if there are recruitments, it’s only in the KCR family.

“KCR has a large family. There is a son, a daughter, a son-in-law, a nephew and many others. I have no objection but why should people of Telangana bear their cost,” he asked.

The BJP leader alleged that Kaleshwaram Lift Irrigation Project (KLIP) has become the “ATM” of the KCR family.

He alleged that KCR went back on its promise to officially celebrate September 17 as Telangana liberation day as he was afraid of the Majlis (AIMIM).

Stating that the next Chief Minister will be from BJP, he said the day will be celebrated officially in a grand manner.

Referring to Huzurabad by-election, he said to defeat Eatala Rajender, KCR had promised Rs 10 lakh to every Dalit household. “I want to ask Dalit brothers if they have received Rs 10 lakh,” he said.

He alleged that KCR also failed to fulfill the promises of 3 acres for every Dalit and one acre for every tribal.

Terming TRS government as “anti-farmer”, he alleged that KCR deprived farmers of the benefits of PM Fasal Bima Yojana.

Shah claimed that Telangana has the highest price rise and petrol is costliest in the state. “Modi government slashed petrol price twice but KCR has not reduced the price even once,” he said.

He said though the Modi government provided assistance of Rs 2 lakh crore to Telangana, the state was still drowned in debts.