Agartala, Oct 12 : President Droupadi Murmu arrived here on Wednesday morning on a two-day visit to Tripura as part of her maiden visit to Northeast amid high security arrangements across the city since Tuesday night.

Besides imposing restrictions on traffic movement in the major roads of the city for two days, Tripura police have deployed a large number of security personnel on the roads, markets and public places including vital installations. The plain cloth police were deployed to keep security surveillance on fringe elements during the visit of President.

Governor Satyadeo Narain Arya, Chief Minister Dr Manik Saha along with his cabinet colleagues and top officials of the state have welcomed her in the airport. A women contingent of 180 personnel of Tripura police led by Superintendent of Police Unokoti district Ms Kanta Jahangir offered Guard of honour to President.

From airport, Murmu inaugurated Tripura Judicial Academy and laid the foundation for National Law University at nearby Narsingarh in a brief programme. Thereafter, she attended a special function organised by tea workers at Durgabari tea-estate near the airport before returning to Raj Bhawan for launch.

palace – had housed Raj Bhawan for 46 yrs in the afternoon at Rabindra Shatabarshiki Bhawan.

She will be given a civic reception by the Agartala Municipal Corporation (AMC) at Town Hall in the evening where Chief Minister Manik Saha, Mayor Dipak Majumder, cabinet ministers, MLAs and delegates from different organisations and trade bodies will remain present.

The President is scheduled to flag off Guwahati to Kolkata express up to Agartala and extension of Agartala-Jiribam-Agartala Jan Satabdi express up to Khongsang (Manipur) with new LHB rake and Vista dome coach on Thursday morning. Then she will offer puja to Tripureswari temple at Udaipur before leaving for Guwahati at 1310 hrs, officials said. 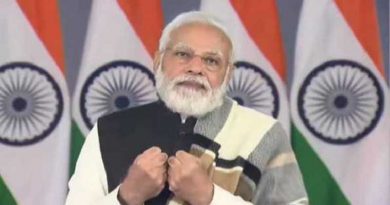 National : Goa to take issue of e-Visa to UK with Home Minister