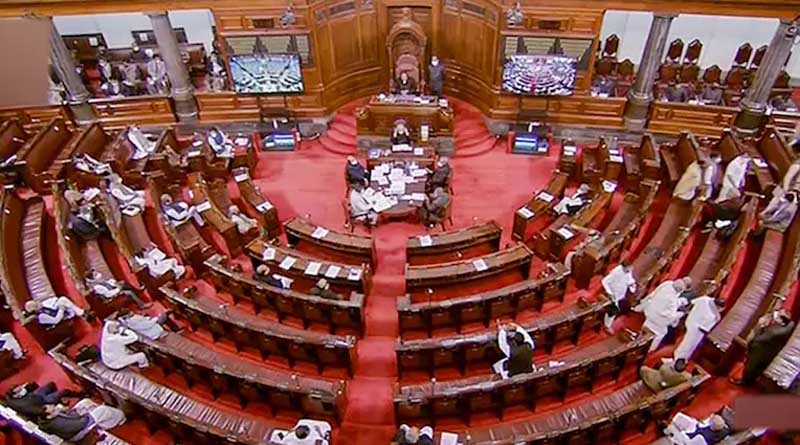 New Delhi, July 29 : The proceedings of the Rajya Sabha were adjourned till Monday amid heated exchanges between opposition and treasury benches over various issues including a Sonia Gandhi-Smriti Irani spat in the Lok Sabha.

First, the House was adjourned till 12 noon minutes after the members assembled for the day and then for the rest of the day when it reconvened at noon.

He said that discussion on price rise has already been accepted for the upcoming week.

The Chair’s announcement didn’t go down well with the opposition and the MPs raised slogans, leading to the adjournment of the House till 12 noon.

The dragging showdown between the government and opposition MPs escalated on Thursday after the suspension of 27 MPs and uproar over Congress leader Adhir Ranjan Chowdhury’s “Rashtrapatni” remark for President Droupadi Murmu.

Congress leader Jairam Ramesh alleged that Leader of the Opposition Mallikarjun Kharge was not allowed to raise a legitimate point-of-order in the Rajya Sabha because of noisy scenes by BJP MPs and Ministers.

He also shared the copy of the point-of-order in which Kharge strongly objected to over Leader of House Piyush Goyal and Finance Minister Nirmala Sitharaman seeking an apology from Sonia Gandhi on the ground that she is a member of the other House.

“It is a time honoured convention that reflections or critical remarks should not be made on the other House or members of the other House. Furthermore, it has been held in the past by the Chairman that no person who is not a member of the House can be referred to in a derogatory manner or in any other way afflicting his/her reputation,” Kharge’s point-of-order read.

“We take a strong objection to the manner in which Nirmala Sitharaman and Piyush Goyal had made uncalled for critical references to Sonia Gandhi, who is a member of the other House,” it added.

European Political Community to hold next meeting in Moldova