Baghpat, Oct 26 : Dera Sacha Sauda chief Gurmeet Ram Rahim, who is on a 40-day parole, has announced that his ‘daughter’ Honeypreet will now be known as ‘Ruhani Didi’.

He said that Honeypreet, who has had her share of controversies and was also arrested, will now be known as Ruhani Didi.

Ram Rahim also quashed rumours of a change of leadership at the Dera Sachcha Sauda and said that he would remain its head.

The Dera chief issued both the statements while addressing Saad Sangat at the Dera in Baghpat.

He is staying at Barnawa Ashram after getting parole from Suneria Jail in Haryana. He has been addressing his disciples online.

Ram Rahim celebrated Diwali online in the camp by lighting sparklers and appealed to the people not to spread more pollution.

He has also released a 3.52-minute Punjabi video song featuring himself from his Dera located in Uttar Pradesh’s Baghpat. He released videos of the Diwali celebrations at the Dera.

Ram Rahim termed his imprisonment as a “spiritual journey” and added that he was writing a book on it.

It may be recalled that Ram Rahim, first convicted in August 2017 by a special CBI court in Panchkula, is serving a 20-year jail term for raping two of his women disciples at the Dera headquarters in Sirsa.

In 2019, Ram Rahim and three others were convicted for the 2002 murder of journalist Ram Chander Chhatrapati.

Last year, he, along with four others, was convicted for hatching a conspiracy to kill the Dera’s former manager Ranjit Singh, who was shot dead in 2002.

During the parole, the Dera chief began to interact with his followers online almost on a daily basis. In the past few days, at least two BJP leaders, including Haryana Vidhan Sabha Deputy Speaker Ranbir Gangwa and Karnal Mayor Renu Bala Gupta were found interacting with Ram Rahim online and seeking his blessings.

The Congress candidate for Adampur bypoll, Jai Prakash, too came forward claiming that he was Ram Rahim’s “biggest disciple”.

Previously, Ram Rahim was granted parole thrice in 2021 and twice in 2022, which includes 21 days in February and a month in June.

The timing of the Dera chief’s repeated release on parole has often raised questions.

According to prison authorities, a convict is entitled to parole of 90 days every year, subject to clearances on his conduct and security clearances from the district administration where he or she would be staying during the parole period.

On February 7, Ram Rahim was granted furlough days before the Punjab Assembly polls and granted Z-plus security “due to a high-level threat to his life from pro-Khalistan elements”.

One militant killed in Shopian 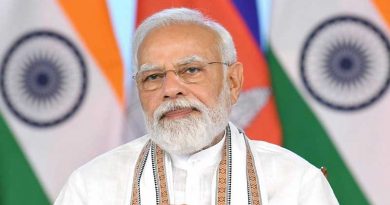