Meerut(UP), Aug 9 : Shrikant Tyagi, accused of misbehaving with a woman in Grand Omaxe Society in Noida, was arrested along with three others on Tuesday, police sources said.

Though no official confirmation has been made, the sources said that he was taken to Noida by the police after being picked up from Shradhapuri locality.

Police sources said that Tyagi was trying to contact his wife and his lawyer. On the basis of his mobile location the police tracked Tyagi and arrested him, they said.

“Eight police teams along with the Special Task Force were searching possible hideouts of Tyagi in three states.

To create pressure on the accused a GST team also carried out searches on his shops in Bhangel area in Noida on Monday, they said.

On Monday, the Noida administration demolished illegal structures erected by Tyagi at the Grand Omaxe Society which was at the core of the flashpoint between Tyagi and his victim last week. Noida Police also announced a cash reward of Rs 25,000 for information on Tyagi after he absconded following an FIR.

Police sources said that Tyagi’s wife was again detained by the police on Tuesday.

She was detained on August 6 and quizzed for more than 24 hours after Tyagi went missing following the incident a day earlier.

SP begins collecting proof of voter deletion in UP polls 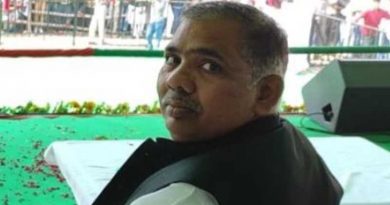