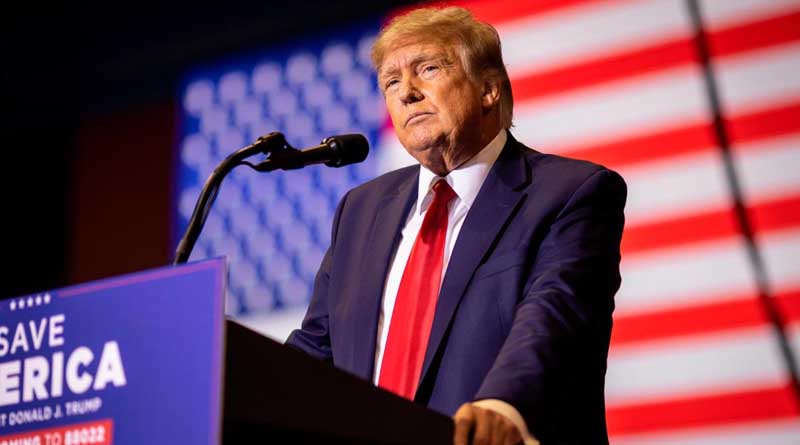 Washington, Aug 31 : The US Justice Department virtually tore into ex President Donald Trump for his statements seeking the material seized in the FBI raid on his Mar-a-Lago (Florida) residence.

It came out swinging against the former President on late Tuesday night, in a scathing court filing to block him from getting his stuff back from the Mar-a-Lago search by stating flatly that “those records do not belong to him”.

In the 36-page document, the Department argued that Trump lacks any ability to even ask for a federal judge to step in and oversee the seizure of sensitive documents that were kept unsecured at Trump’s oceanfront mansion in south Florida, according to media reports.

Represented by a defense team criticised for their ineptitude, Trump waited a good two weeks after the FBI raid at his Palm Beach estate to sue and ask for a judge to appoint a “special master” to oversee federal agents’ handling of the records they seized. On Tuesday night, the DOJ responded by arguing that the Presidential Records Act “makes clear” that the government “has complete ownership, possession, and control” of those documents and the former President can’t just ask for them back – or dictate how they should be handled.

Trump is currently under investigation by the FBI for putting the nation’s security at risk by mishandling “top secret” government records. For more than a year, his office had been in negotiations with the National Archives over the way he took more than a dozen boxes of presidential records from the White House to his private estate instead of turning them over to the nation’s archivists for proper preservation, US media outlet The Daily Beast said.

In recent days, the looming threat of an unprecedented prosecution of a former President has prompted his allies – even prominent Republicans like Senator Lindsey Graham – to threaten nationwide violence and even civil war. President Joe Biden had hit back at Lindsay Graham with an apparent tongue in cheek comment: “Watch your back, we are coming with stricter gun control laws.”

Trump sued the federal government in South Florida federal court, and US District Judge Aileen Mercedes Cannon asked the DOJ to respond, hence Tuesday’s filing. The scathing arguments laid out in the court filing-signed by top Miami federal prosecutor Juan Antonio Gonzalez and Jay I. Bratt, chief of the DOJ National Security Division’s counterintelligence and export control section, take the most aggressive tone by the DOJ yet against the former President.

From the get-go, it counters the disinformation and politicising that Trump has engaged in through public statements on social media that also bled into his lawsuit, with the DOJ saying that it would provide “a detailed recitation of the relevant facts, many of which are provided to correct the incomplete and inaccurate narrative”.

For example, Trump and his lieutenants – such as former White House aide Kash Patel -have argued that he had already declassified mountains of records, thus eliminating any accusation that such records were sensitive or improperly handled. On Tuesday, the DOJ revealed that Trump’s lawyers never even mentioned that any of the documents in the 15 boxes Trump turned over to the National Archives in January 2022 were declassified.