#item_description], A fresh United Nations-led bid to seek to resolve decades of tensions in Cyprus began in Geneva on Tuesday, with Secretary-General António Guterres “realistic” about the chances of making progress, his Spokesperson said.

“The Secretary-General decided to organize this meeting following the consultations conducted over the past several months on his behalf by Under Secretary-General Jane Holl Lute”, Stephane Dujarric told journalists at the UN Palais des Nations, referring to the veteran UN and former US Government official who has been working to advance reconciliation.

“@antonioguterres decided to call this informal meeting following the consultations over the past several months. The purpose will be to determine whether common ground exists to negotiate a lasting solution to the #Cyprus issue within a foreseeable horizon,” – @UN_Spokesperson pic.twitter.com/Zw4k7qRluB

“As we have repeatedly said, the purpose of the meeting will be to determine whether common ground exists for the parties to negotiate a lasting solution to the Cyprus issue within a foreseeable horizon.”

The development comes four years after Greek Cypriot and Turkish Cypriot leaders last met in Switzerland to discuss the future of the divided Mediterranean island.

That conference in the Alpine resort of Crans Montana, stalled after a week of discussions on six main issues, including security and guarantees, new territorial boundaries, and power-sharing.

This time round, UN Secretary-General Antonio Guterres is scheduled to oversee three days of informal meetings in the Swiss city, beginning on Tuesday afternoon.

His first bilateral appointments were due to be with Turkish-Cypriot leader Ersin Tatar followed by Greek-Cypriot President leader Nicos Anastasiades.

While Mr. Anastasiades has already participated in UN-led negotiations over the island’s peaceful future, Mr. Tatar heads the Turkish-Cypriot delegation for the first time, after becoming President in October 2020.

“(The) Secretary-General is realistic,” said Mr. Dujarric. “This is an issue that he knows well, he has participated in discussions before”.

Discussions in the Swiss city will also feature delegations from Greece, Turkey and the UK – all guarantor powers of Cyprus that agreed to the island’s independence in 1960 and who have historically featured in discussions over next steps.

The development comes after Greek Cypriots and Turkish Cypriots marched for peace at the weekend in Nicosia, Europe’s last divided capital, split for more than four decades. 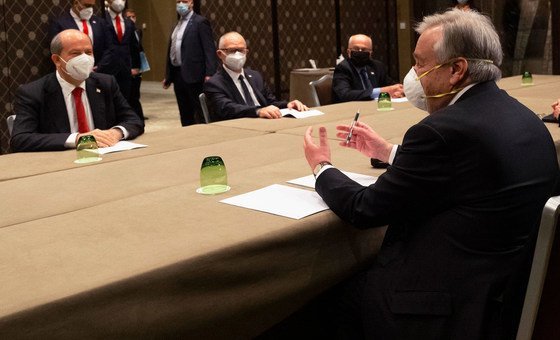 “The Secretary-General will move forward based on the outcome of these, of the informal talks,” said Mr. Dujarric. “As we’ve said – and I think I’ve said back in February in other times in briefings in New York – the parties are welcome to be creative and the Secretary-General will be encouraging them to move – you know – to use diplomatic language in a sincere and frank, and frank manner. Again, it’s important to stress that these are informal talks.”

Helping to maintain security on the island is one of the UN’s longest-running peacekeeping missions: the United Nations Peacekeeping Force in Cyprus. (UNFICYP). It was established in 1964 to prevent further fighting between the Greek Cypriot and Turkish Cypriot communities and bring about a return to normal conditions.

The mission’s responsibilities expanded in 1974, following a coup d’etat by elements favouring union with Greece and subsequent military intervention by Turkey, whose troops established control over the northern part of the island.

Ceasefire lines extend over 180 kilometres across the island. In the absence of a formal ceasefire agreement, UNFICYP’s 800-plus troops and 60-plus police officers deal with hundreds of incidents each year, according to the force’s website.

Mali: Around 20 UN peacekeepers injured in major attack on MINUSMA base

‘Do the right thing’ and protect civilian infrastructure during conflict: UN relief chief

Human rights must be ‘front and centre’ of COVID-19 response: Secretary-General

National News Update : Who is in, Who is out, only Pinarayi Vijayan knows

Covid Vaccine : How to encourage people with Covid-19 vax hesitancy

Crime : Ex-IAS officer in UP booked for false propaganda

Research / Education : IIT-K to study impact of immersion of bodies in water, soil