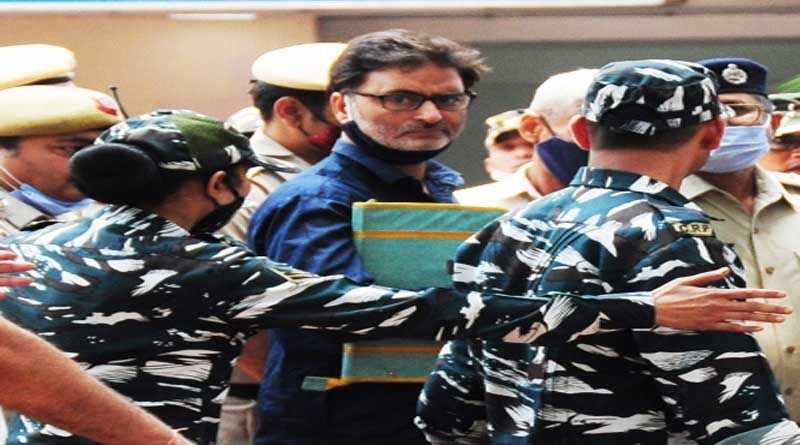 Malik was hospitalised by the prison authorities after his health deteriorated on July 26 following his ongoing hunger strike.

After returning to his cell, Malik has decided to continue with his hunger strike and is still not having any food.

“He is still on intravenous fluids,” the top prison official said.

The jailed separatist leader, who is currently lodged at Jail No. 7 of the Tihar Prison, went on the hunger strike on July 22.

When asked the reason behind his hunger strike, the official refrained from divulging any details. However, prison sources said that the Kashmiri separatist is protesting against the agencies that are investigating his cases.

Malik was arrested immediately after the February 2019 terror strike by Jaish-e-Mohammad and has been in Delhi’s Tihar Jail for over two years.

The killing of the 40 CRPF personnel in a bomb blast on February 14, 2019, ahead of the Lok Sabha elections, came as a turning point. Within days, Malik was lifted from his Srinagar residence.

His JKLF, along with Jamaat-e-Islami, was banned.

The country’s premeir probe agencies got two high profile cases — Rubaiya Sayeed’s kidnapping on December 8, 1989 and the assassination of four Indian Air Force (IAF) personnel on January 25, 1990 — revived against Malik after a freeze of 10 long years.

Malik was convicted in connection with a 2017 terror funding case and sentenced to life imprisonment on May 25 by the National Investigation Agency special court in Delhi in which he pleaded guilty to all charges.

Her release was managed by swapping four jailed militant commanders when her father Mufti Mohammad Sayeed was the then Home Minister in the V.P. Singh government.

Listed as a witness for the prosecution, Rubaiya Sayeed appeared before the CBI court in Jammu and identified Malik and three other accused as her abductors.

Malik is currently lodged at Jail No. 7 of the Tihar Jail.

The NIA Court in its order had awarded two life sentences and five punishments of 10 years of ‘Rigorous Imprisonment’ each to the convict.

Rigorous imprisonment means confinement of the offender in a manner that increases the hardship of the jail term based upon the nature of the offence by subjecting the offender to special arrangements in the jail.

However, despite Court orders, Malik was not given any work inside the prison due to security reasons.

Sisodia to BJP : Arrest me if video on liquor scam is genuine or accept conspiracy by PMO

6 killed as ambulance crashes into truck in Bangladesh