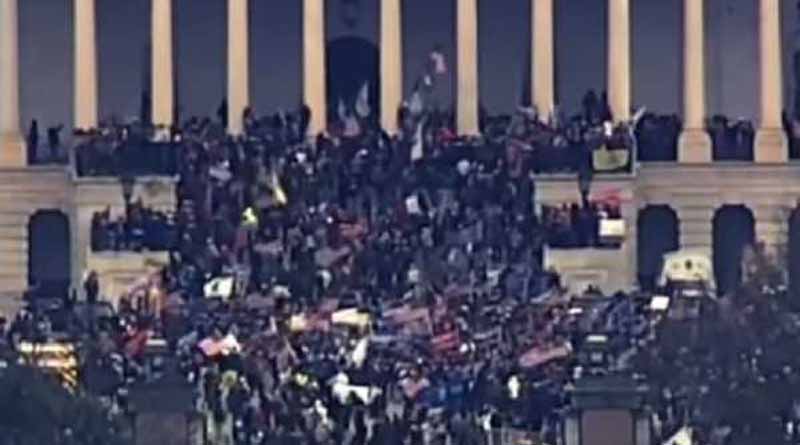 Washington, Aug 2 : A Texas man who was part of the US Capitol riot armed with a holstered pistol and threatened his own children to keep quiet about his role has been sentenced to more than seven years in prison, BBC reported on Tuesday.

Guy Reffitt, 49, was found guilty in March on five felony counts, including obstruction of an official proceeding and interfering with police in a riot.

His sentence is the longest imposed on any of the US Capitol rioters till now.

Nearly 900 people have been charged in the 6 January 2021 raid on Congress.

However, reports said that Reffitt himself did not actually enter the Capitol with the horde of Trump supporters who breached the complex as lawmakers met to certify Joe Biden’s win in the November 2020 presidential election.

He retreated after an officer pepper sprayed him in the face, but video evidence showed Reffitt egging on the crowd and leading other rioters up a set of stairs outside the building.

Multiple videos Reffitt took on and after 6 January, in which he discussed planning and bragged about participating in the riot, were used in evidence against him.

Issuing a prison sentence of 87 months on Monday, US District Judge Dabney Friedrich said Reffitt’s actions and statements were “frightening claims that border on delusional”.

An oil-field worker and alleged recruiter for the far-right Three Percenters militia, Reffitt is said to have driven from Texas to Washington DC and led fellow Three Percenters up the main staircase to the Capitol building.

According to court papers, he had told fellow members of the militia that he planned to drag US House of Representatives Speaker Nancy Pelosi out of the Capitol building by her ankles, “with her head hitting every step on the way down”.

Reffitt was reported to the FBI by his son, Jackson, 18 at the time, who told investigators his father had threatened him.

“He said ‘if you turn me in, you’re a traitor,” the younger Reffitt said at his father’s trial earlier this year. “‘And traitors get shot'”.

The sentence Judge Friedrich handed down was slightly below what is recommended by federal guidelines. She also declined to apply a domestic terrorism enhancement – the first requested in a US Capitol riot case.

Will contest 2024 LS poll from Kannauj in UP: Akhilesh

France take on Australia as holders’ curse lingers on